On the night of July 7th, I assisted the Biodiversity Research Institute (BRI) with the banding of a Common Loon female on in Fall River. Bird banding is the process of catching birds, typically in nets, to take measurements on health, such as blood samples and wing length, and place a metal ring, or “band,” with a unique set of numbers. This tag acts as the bird’s social security number and is used to track the bird throughout it’s life. This bird banding demonstration was extra special: this female is part of the loon couple that hatched the first chick in southeastern Massachusetts in over a century, marking an incredible and exciting milestone in conservation.

The BRI Loon Program researches loons across the Northern Hemisphere to track populations and individuals and aims to understand and lessen threats to these magnificent creatures. BRI helps state and federal organizations with the monitoring, banding, and general conservation and protection of Common Loon, which are considered a species of Special Concern in Massachusetts. The male of the couple was part of a BRI project that involved the translocation of a cohort of 24 chicks from Maine and New York to Massachusetts. Translocation is the process of relocating chicks from very healthy populations, Maine and New York, to locations where the species is still struggling, southeastern Massachusetts. In 2015, this male was relocated as a chick from the Adirondack Park Region to the Assawompsett Pond Complex in Lakeville. The male returned to Massachusetts in 2018, and after two unsuccessful breeding seasons, it finally met a mate and produced eggs in 2020. This male was followed by the BRI team from Lakeville to Fall River. Since there were no other loons in the immediate area, researchers disappointingly assumed the male would not breed this season. But, to our surprise, the male found a mate and together they hatched the chick – a symbol of hope.

Historically, loons had nested in southeastern Massachusetts. The Common Loon was extirpated, or locally extinct, from southeastern Massachusetts in the early twentieth-century due to anthropogenic threats such as sport hunting and shoreline development. Loons are built for aquatic environments, so their legs are off-set towards the rump and act more as propellers while swimming and chasing fish than legs— typically loons stay in the water except for nesting and incubation and inch or waddle along land with their chests dragging on the ground. As shown by their clumsiness on land, loons need to nest on small islands or directly on the water’s edge. Development of houses and camps close to shore limited and still limits these nesting areas.

Other threats include lake acidification from increased carbon in the atmosphere, lead poisoning from fishing weights, oil spills, and aquatic recreation (water skiing, boating, etc). Some newer pressing threats include mercury poisoning and water level fluctuation. Atmospheric deposition of mercury in lakes has been increasing due to industrialization and the burning of coal. This mercury bioaccumulates, or gets built up through the food chain, and ultimately poisons the loons. With increased damming of waterways, water levels rise and flood nests or fall and leave nests stranded. Loons are considered bioindicators of contaminants and water clarity, so they are very sensitive to these threats. With all of these threats and the sensitivity of the species, this chick marks an amazing conservation success story in southeastern Massachusetts.

The BRI representatives with proper training captured the loon around 9:00pm. The researchers find the loons and flash a spotlight into their eyes to temporarily stun them as the boat can get closer and the animals can be netted. Once to shore, the BRI researchers asked the group of roughly ten bystanders for a volunteer to hold the loon as they took measurements. I jumped all over this, as I have experience with bird banding with songbirds and owls. I could have had the foresight to know that loons would be different due to their feistiness and weight, but it did not cross my mind in the moment. The female was placed on my lap, weighing more than both my cats combined (12 pounds), and I had to bear hug her against my chest with her wings and feet tucked in so she could not break free, hurt me, or injure herself during the banding process. I was instructed to put her head between my bicep and my side, almost like a headlock, for the same reason. 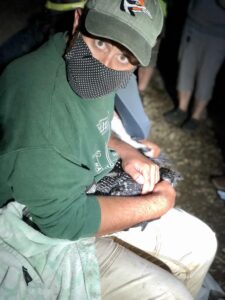 This was uncomfortable for me, but since loons uniquely have dense bones, they are able to handle the pressure. I do not claim to be a very strong person, I do not go to the gym, but I am surely not weak either; the loon out-wrestled me a few times with a wing or feet breaking free. This truly showed me the power that this creature holds. Knowing that loons also uniquely fight each other to the death over territory and are able to spear and kill predators like Bald Eagles, I was nervous! I held the loon for roughly 45 minutes as the researchers drew blood, measured the bill, wings, and feet, and banded the female. Throughout the process, she let us know that she was not happy, and having her chick making distressed sounds peeved her even more. One of the researchers even said that the female was one of the most aggressive loons that she had worked with and often chased her boat as she was monitoring the family. Although this would have been nice to know before volunteering to hold her, feeling her weight and power, examining the colors and feathers, and watching the researchers collect data to protect this species was well worth the nerves and stress.

The loon family was driven back to the location where they were captured and the family was released. The male and chick immediately linked up and swam together away from the boat, which is a great sign that the parents will vigilantly continue to protect the chick from predation— even seconds apart could mean death from above (think Bald Eagles and Great Horned Owls) or below (think Largemouth Bass).

This experience truly exhibited the power of this special bird and the strong bond between parents and chick. Although sometimes initially upsetting due to the birds anger or discomfort, bird banding is a necessary part of conservation science and protection of threatened species, and I feel fortunate and thankful to have been involved. Big thank you to BRI!